Snow White massage is yet another massage oil shop located in one of the happiest corners of Sukhumvit: Soi Airi. This shop doesn’t stand out in a lot but it doesn’t hurt to visit to check if they have jewels. And I have been serviced well here.

Or if you guys want to go for the safe bets, I recommend my favorite joints in this area:

You can’t go wrong with this legendary shops. 🙂
Also, if you guys wish to stay in this lovely area I recommend

Arize hotel. A mad cool cheap hotel that is guest friendly too. Or in other words, they don’t have any joiner fee for any girls you guys might pick up. Awesome.

My report on Snow white massage

So I visited one time this shop years ago and to the best of my memory, their website has not been updated since, so beware that the pictures on the website might be largely outdated.

I had no idea what she told them in Thai, but mamasan said to me this 2 girls “can do” what I wish. So I picked one of them, paid 2300 THB upfront and went to the room.

The room was far from being one of the best I saw in Soi Airi but enough for the purpose. After the shower, I think the girl took the mamasan instructions too seriously because the girl started to bbbj me off really furiously without any condom, and without a preliminary massage. 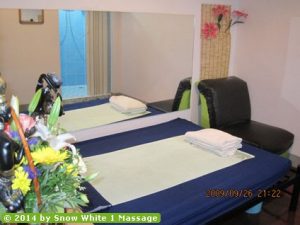 That was a very clear sign that she understood the mamasan instructions to CIM. And so I popped in her mouth with no regrets. She held the white juicy in the mouth like a champ for like 10 seconds and spat it out. Good times lads.

I washed my dick in the shower and moved back to the bed. She massaged me for a good 30 minutes and then I told her to take a rest. We then had some silly chat in English for another 10 minutes. I checked the time and I saw I still had 50 minutes left, so we started fooling around again.

Tipped her 300 for a good job, quick shower, and left 20 minutes the early job was done.

Basically, another of those small massage shops in Soi Airi oriented towards Japanese and Korean customers. The shop is OK, prices are OK, mamasan was kind. So it all goes down to the luck of masseuse picking lottery.

With happy ending shops, it doesn’t take long to realize it’s a hit-or-miss game. I have been lucky with my pick so my verdict is positive.